This post is sponsored by Giovanni Rana, all opinions expressed are my own. 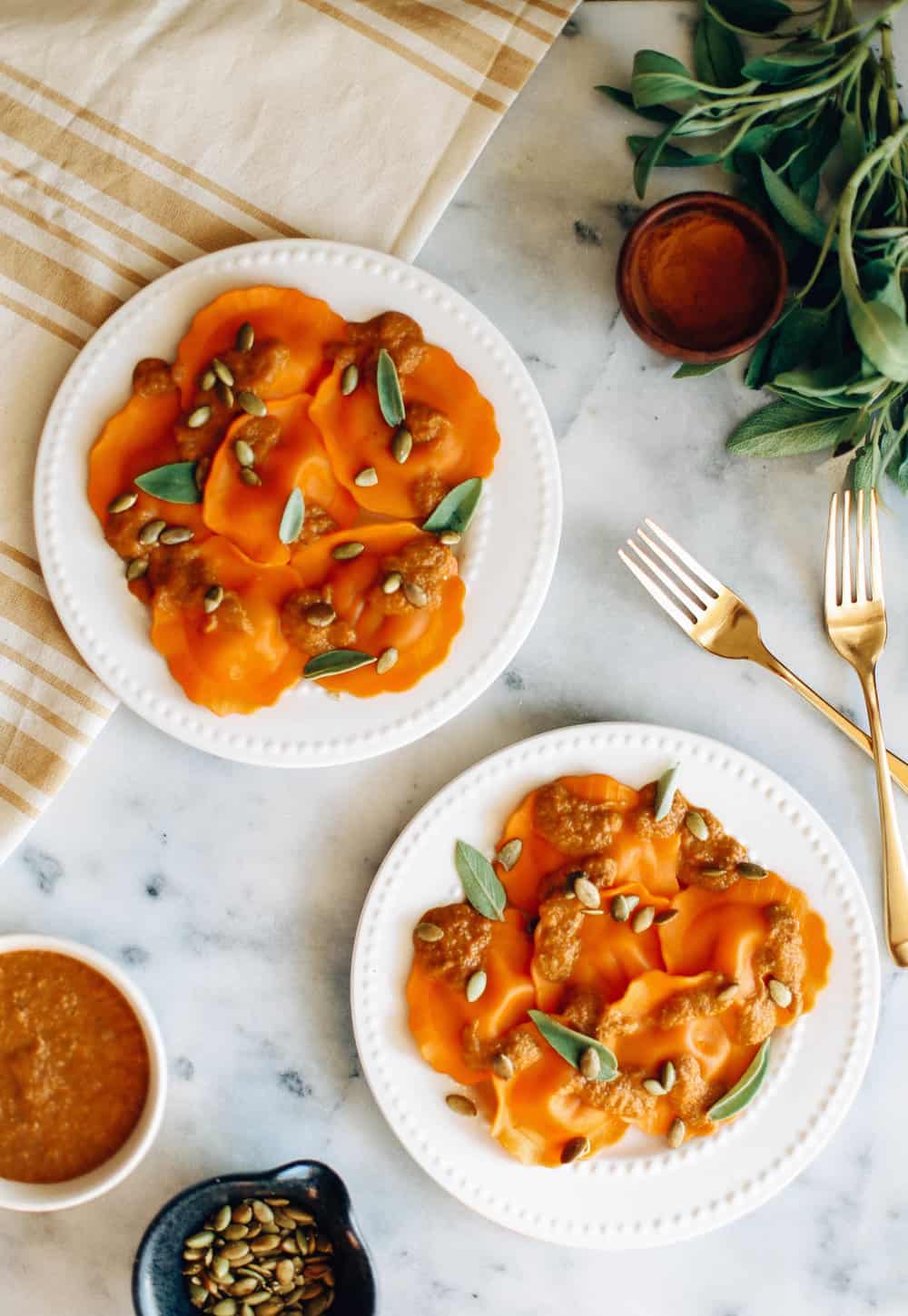 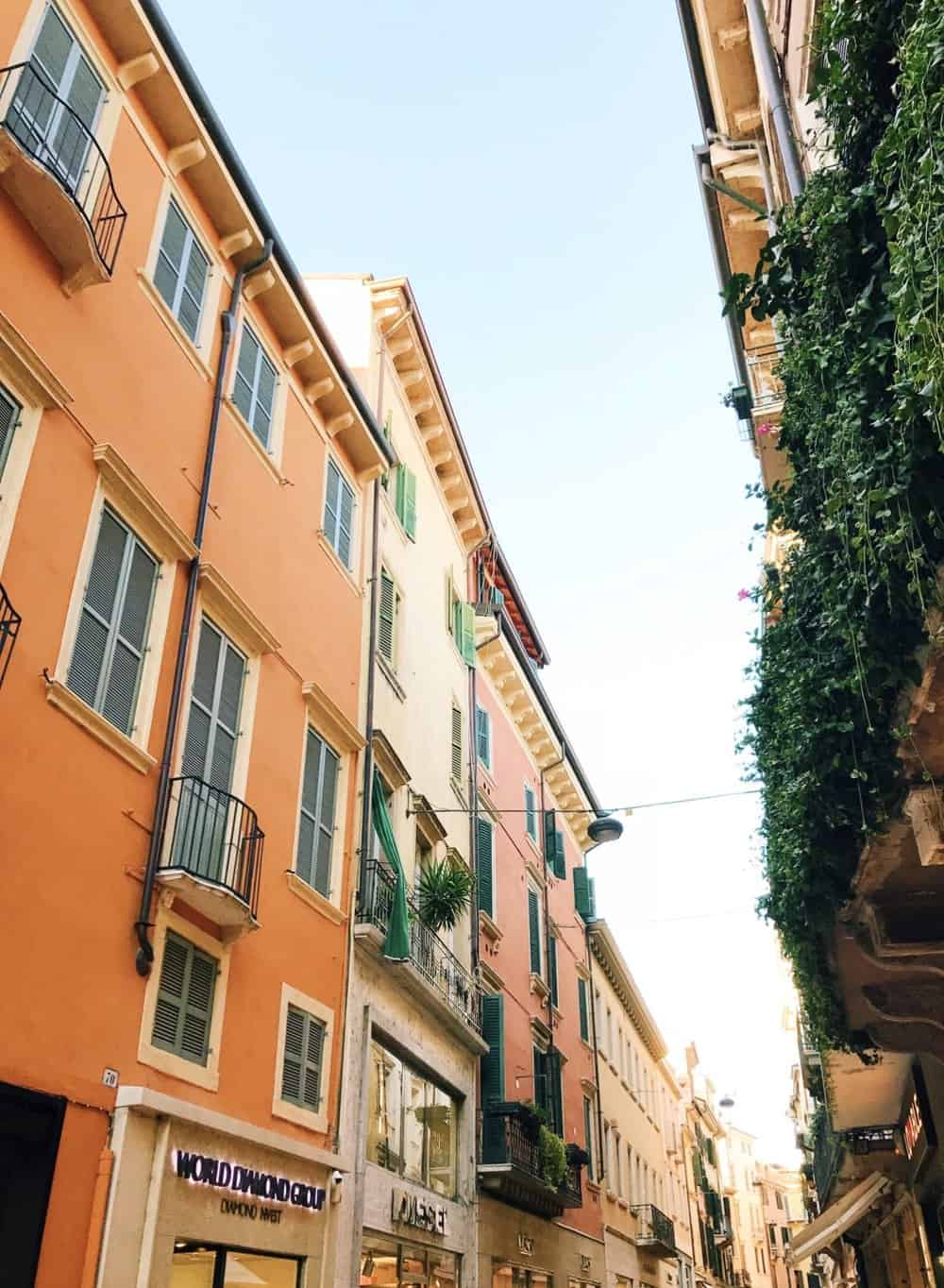 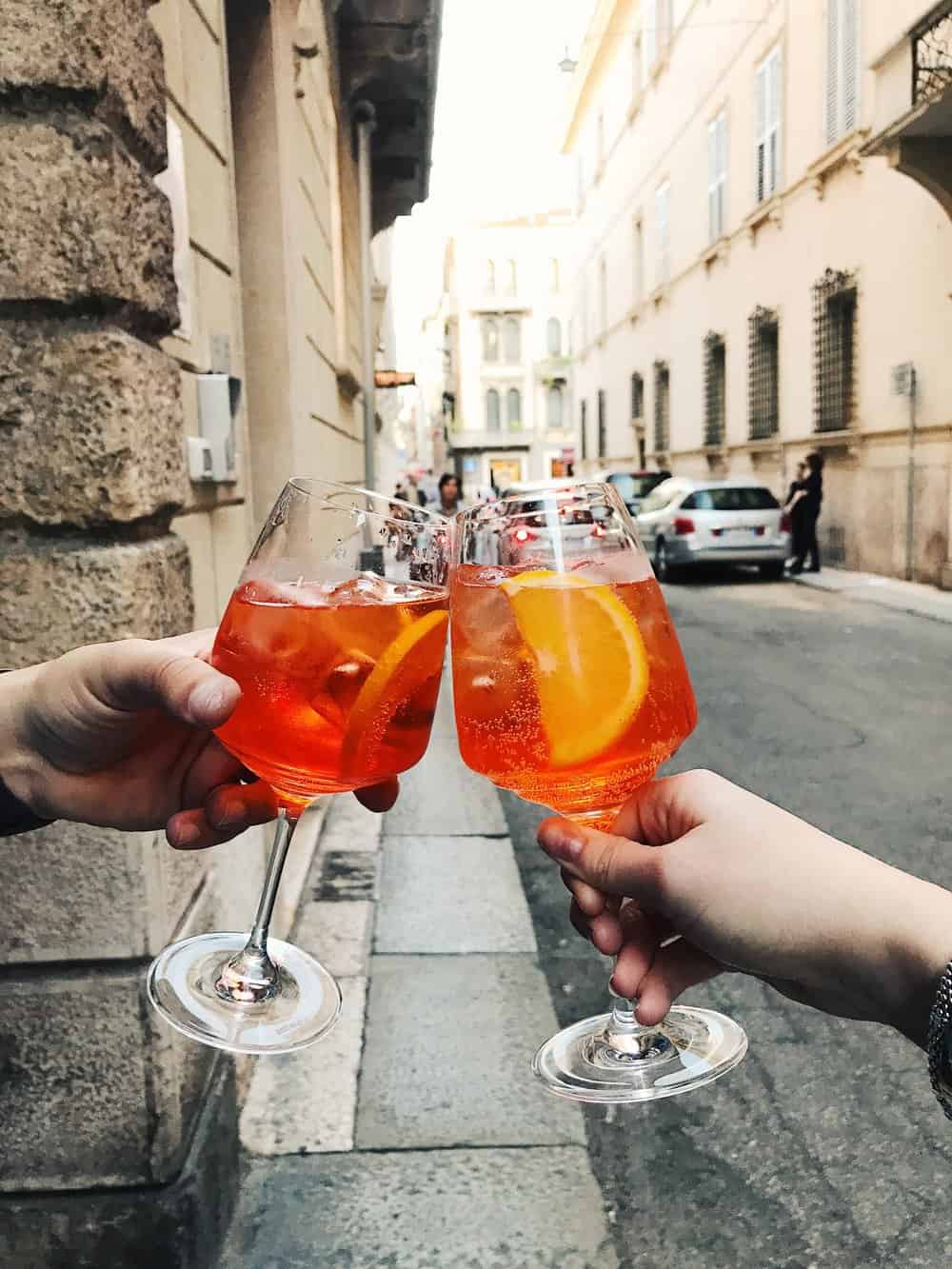 Every once in a while I realize just how much I love being apart of the food blogging world. This last month I was fortunate enough to travel all the way over to Italy for a pasta experience of a lifetime! Giovanni Rana invited Jared and myself for an extravagant weekend with their family in their hometown of Verona, Italy.

The weekend was filled with fun cultural activities around Verona, a tour and pasta making class at the Giovanni Rana plant and a food styling workshop in an Italian villa on Lake Garda. Not to mention the incredible feasts and parties that took place every night. Italians and the Rana family know what it means to have a good time and certainly make you feel like family! Their refrigerated pasta may reach countries all over the world but they have managed to maintain a family feel to the entire organization.

Even a month later the trip feels like an absolute dream! We are still reminiscing on the couch with nightcaps of limoncello and Giovani Rana Mushroom Ravioli.

Verona was filled with gorgeous views, wineries, espresso, Italian cuisine and is quite possibly the most romantic city in the world (or they hope for, that is!). Our first day we were taken for a wine and lunch pairing at Veneto Winery. It was perched on a gorgeous hillside in the countryside of Verona. At the end of our vineyard tour we were served a five course pasta pairing lunch filled with potato gnocchi, endless wines and even a Giovanni Rana Spinach & Ricotta Ravioli ‘salad’ served in a parmesan cheese bowl.

After lunch, it was time to meet Mr. Giovanni Rana himself. Not even five steps into the Giovanni Rana headquarters and we were greeted by one of the coolest vintage European motor bikes I have ever seen. It was this exact bike that Mr. Giovanni rode around to deliver fresh pasta to the doors of busy families around Verona in the beginnings of his company. The inspiration for the pasta company came during the early 60’s when society was changing and women started working, so they did not have time to stay home making pasta. Mr. Giovanni saw a need and left being a baker to become a pasta maker. 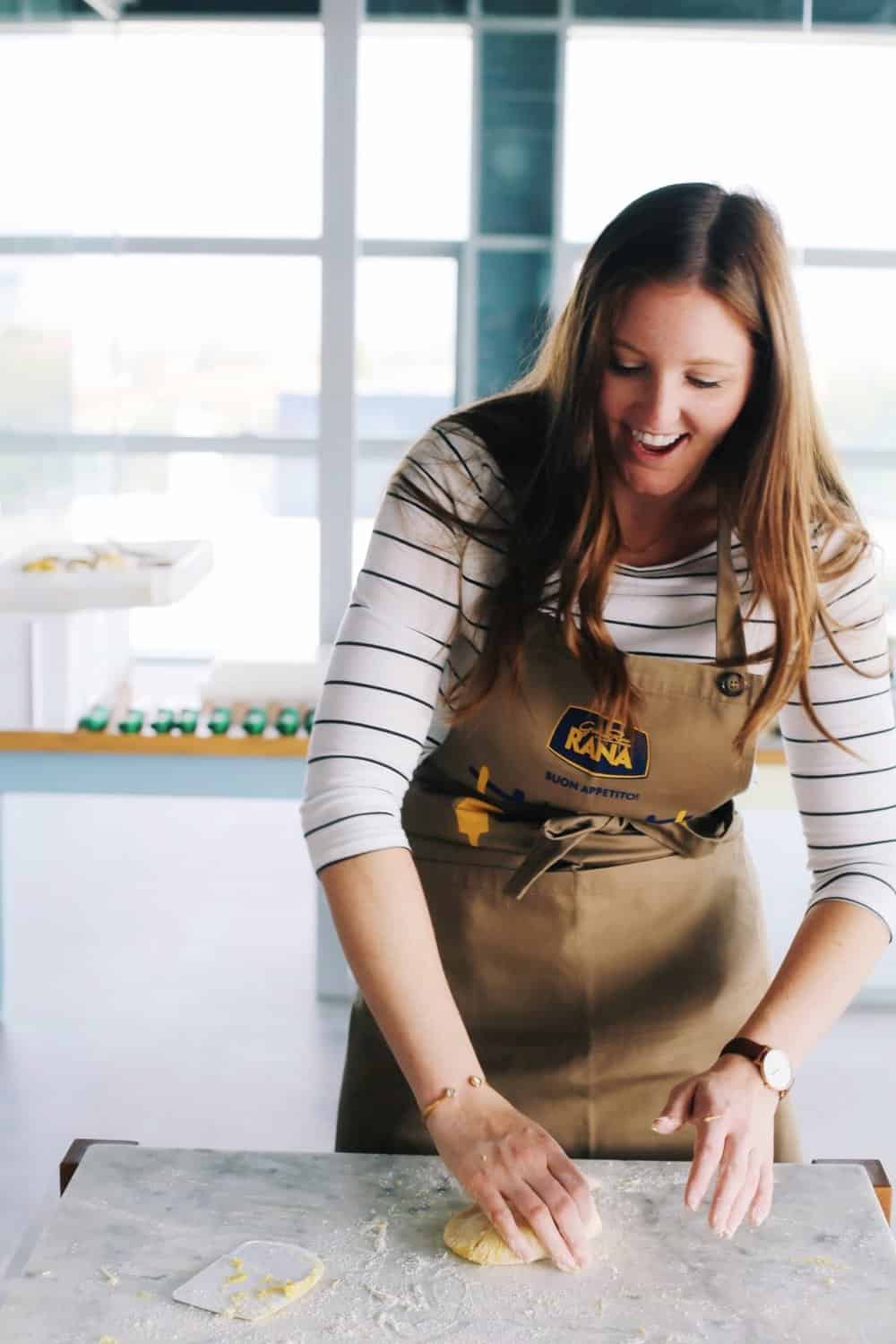 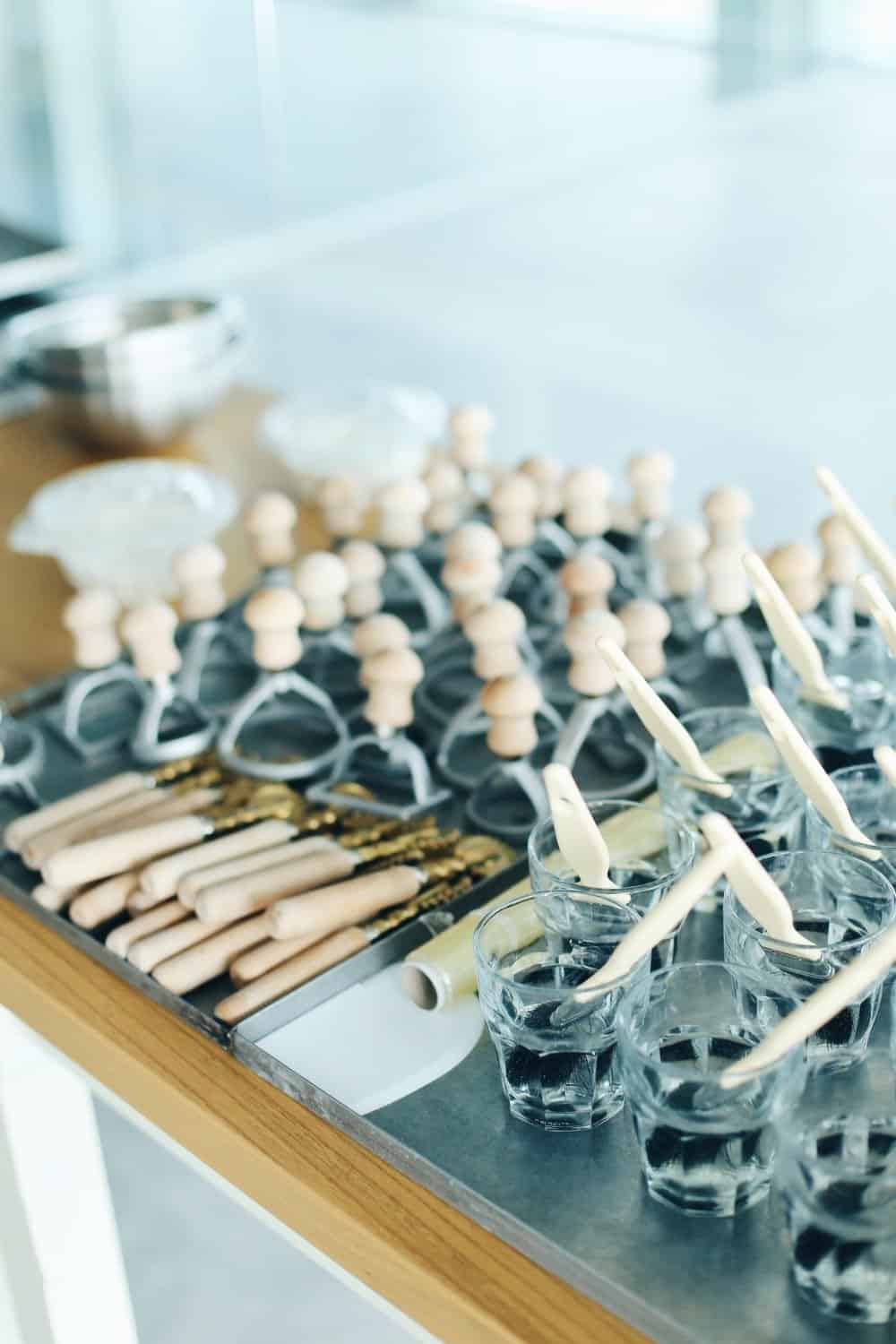 It wasn’t until the next day at the pasta factory tour that we realized just how fresh the product was. Upon arrival, I was instantly happy that I had chosen to skip breakfast because the tour was filled with samples of the creamiest of cheeses that are stuffed into the ravioli. I’d happily spare a croissant for spoonfuls of fresh creamy gorgonzola and the cheese from an 84lb freshly cut Parmigiano-Reggiano wheel.

The factory truly is magical and can only be equated to Mr. Wonka and the chocolate factory. Mr. Giovanni Rana is the soul behind the company but his son, Gian Luca, is clearly the magician in front of the curtain. Gian Luca has helped create some unimaginable machinery that not only produces pasta at .5 ml thinness but also faster than I ever thought was possible. The technique is so top secret that we were not allowed to step foot into the building with our phone or camera, only with note pads.

After seeing how the pasta was made it was only fitting for us to take a stab at it ourselves. Jared and I tied each other into our aprons and were given a lesson on how to make ‘authentic’ pasta. I usually take the lead in the kitchen so it was a sweet role reversal to have him side by side with me. 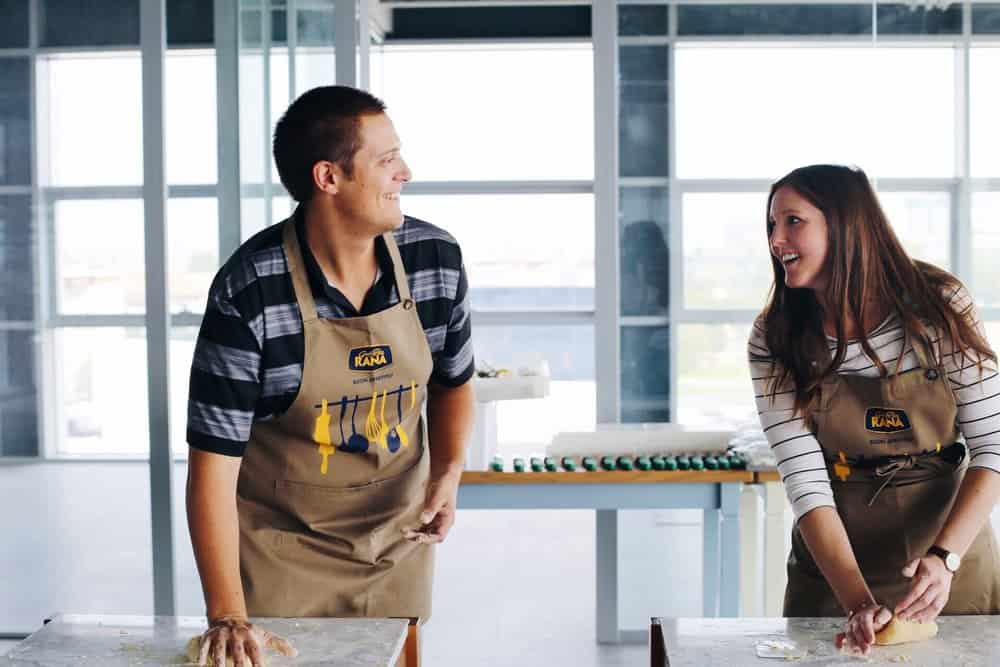 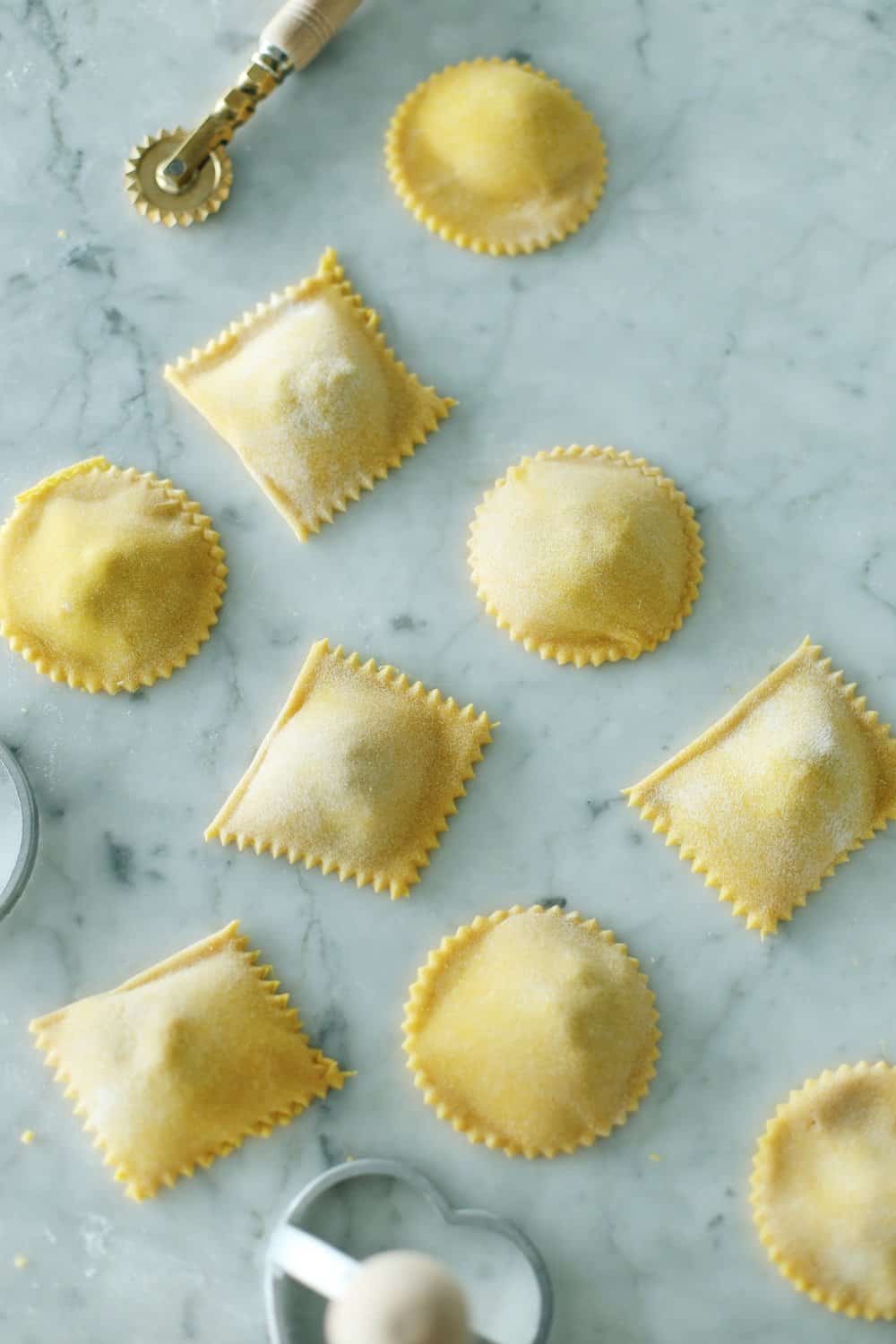 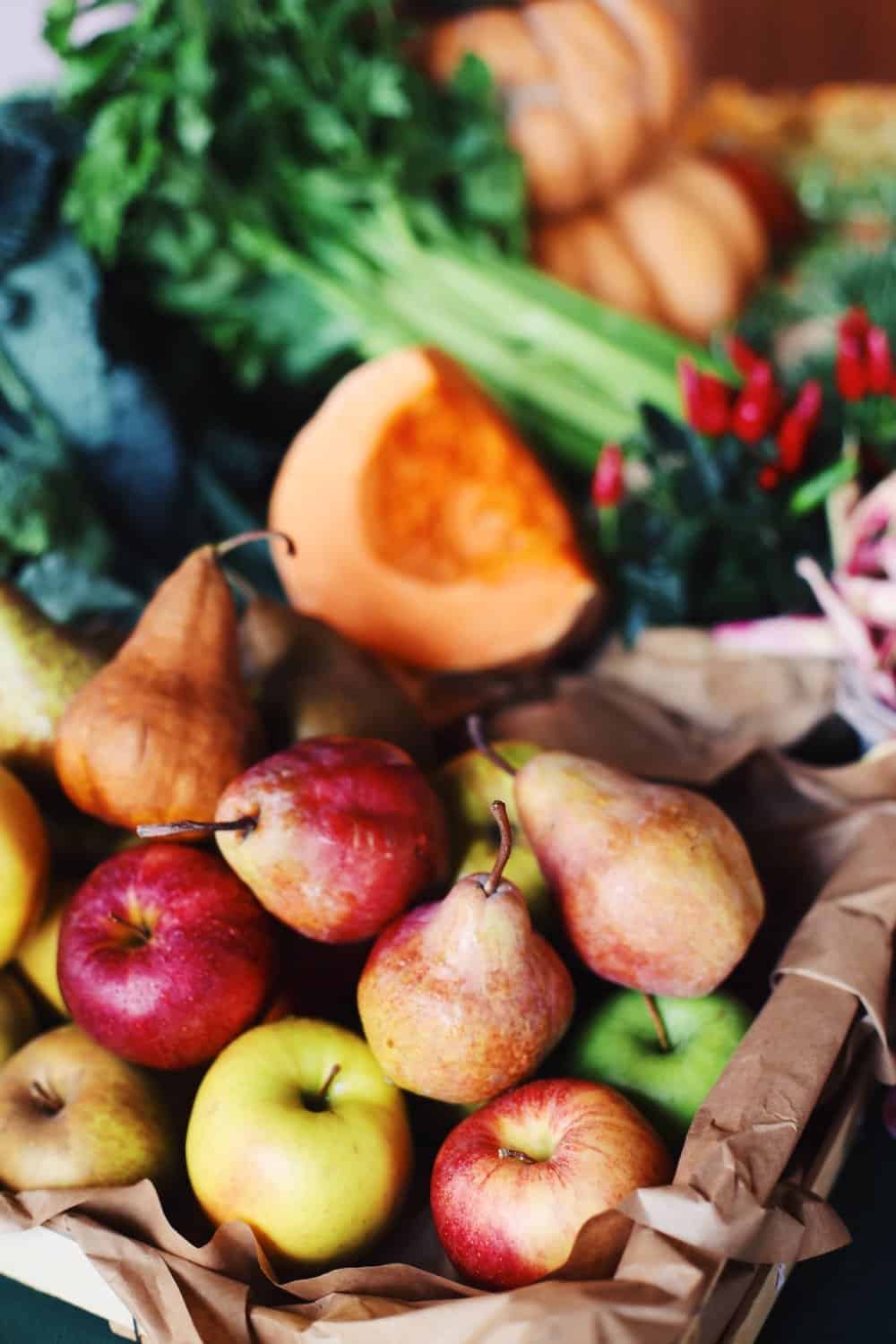 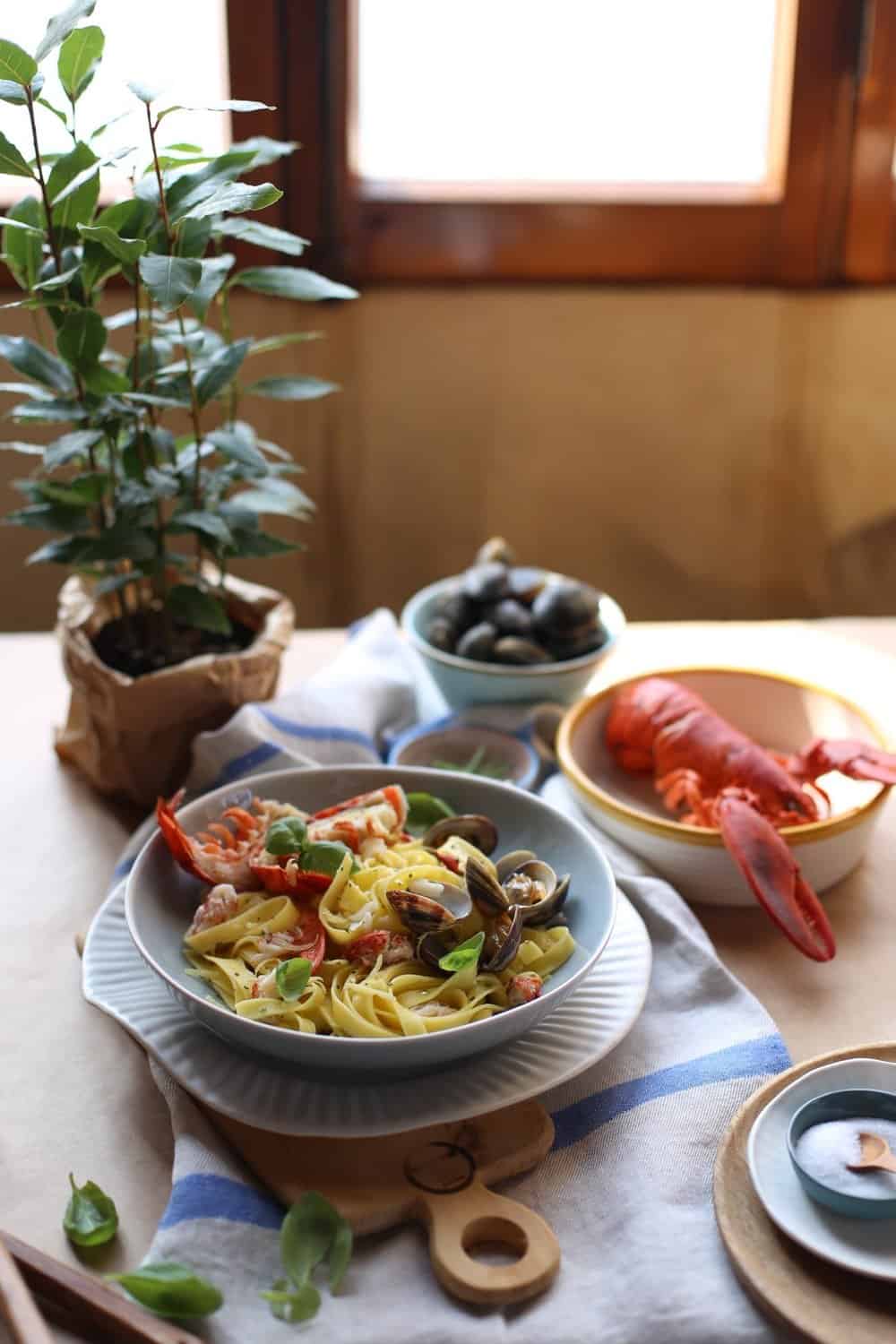 My favorite activity by far was the food and styling workshop at the Rana Family’s lakeside estate, Villa San Vigilio. Not only were we brought into a villa that looked like a movie set but into a room that was filled with endless amounts of pasta, fresh ingredients and props to make our very own dish that we were inspired by. Talk about a dream come true. I felt like I was suddenly put into an Italian version of ‘Chopped’ but with every ingredient imaginable instead of weird combos like ostrich eggs and raisins.

I managed to squeeze out a lobster Tagliatelle inspired dish and an acorn squash Mushroom Ravioli during the styling session. The lobster tagliatelle was inspired because of our gorgeous lakeside location and the mushroom squash ravioli by the season! 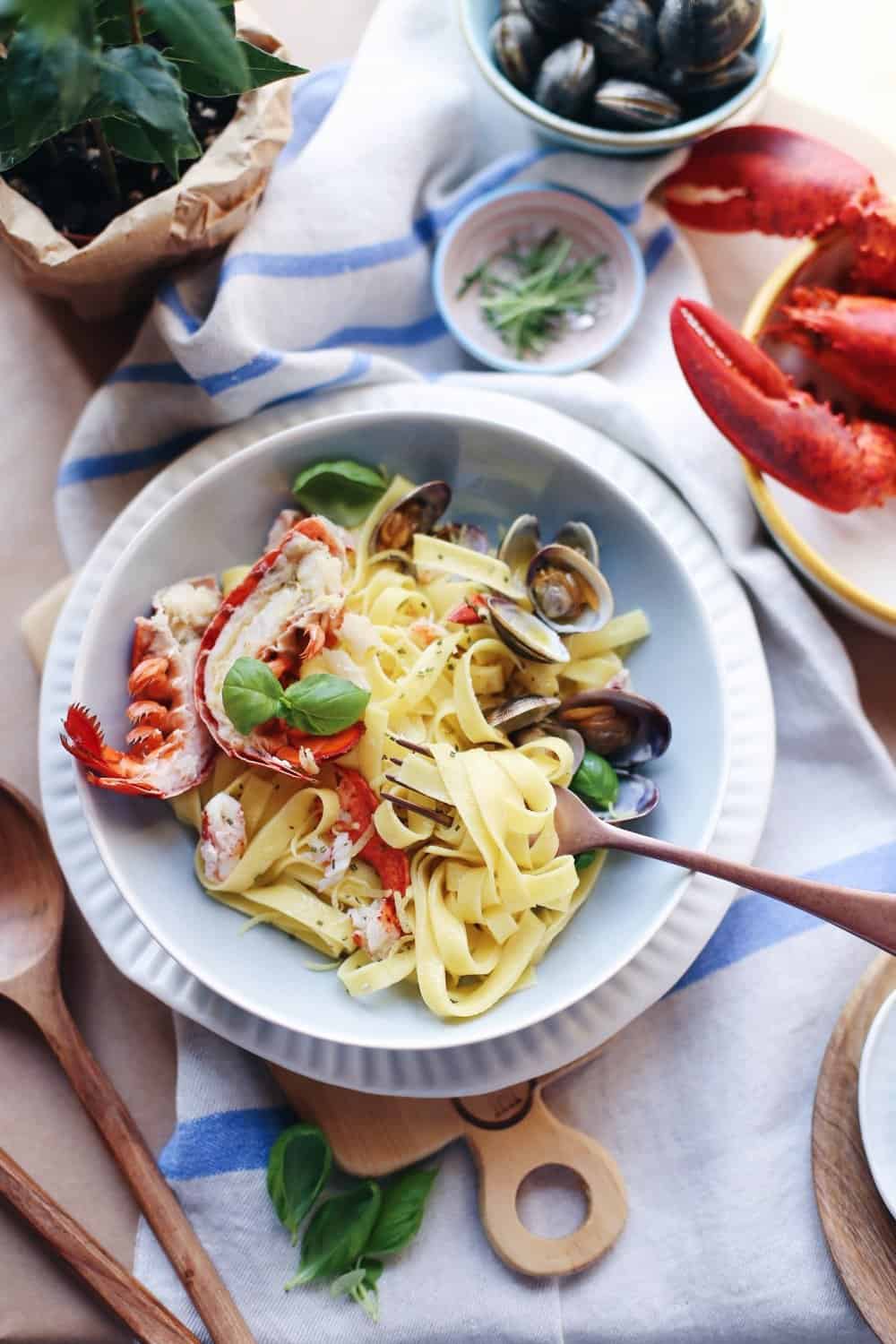 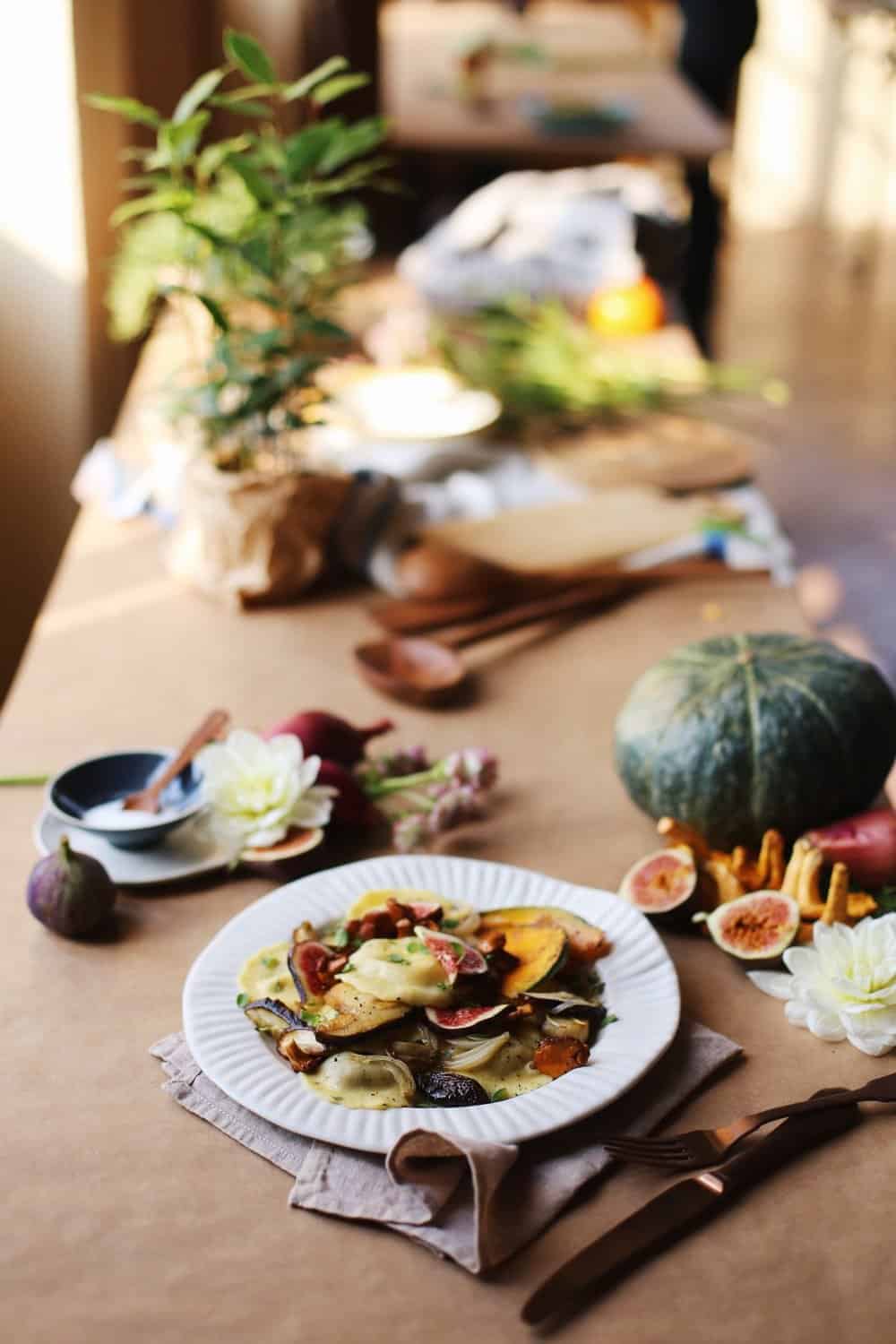 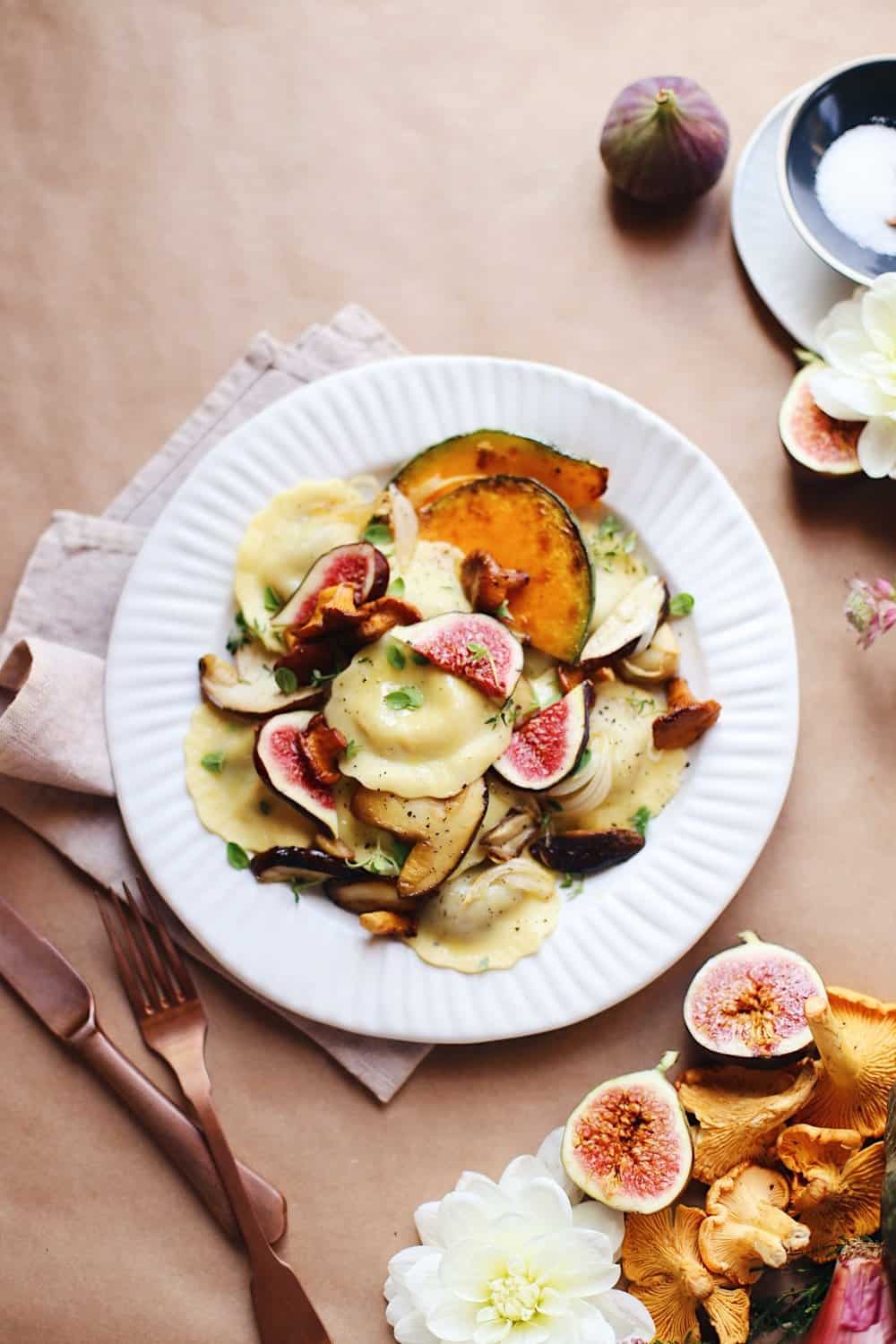 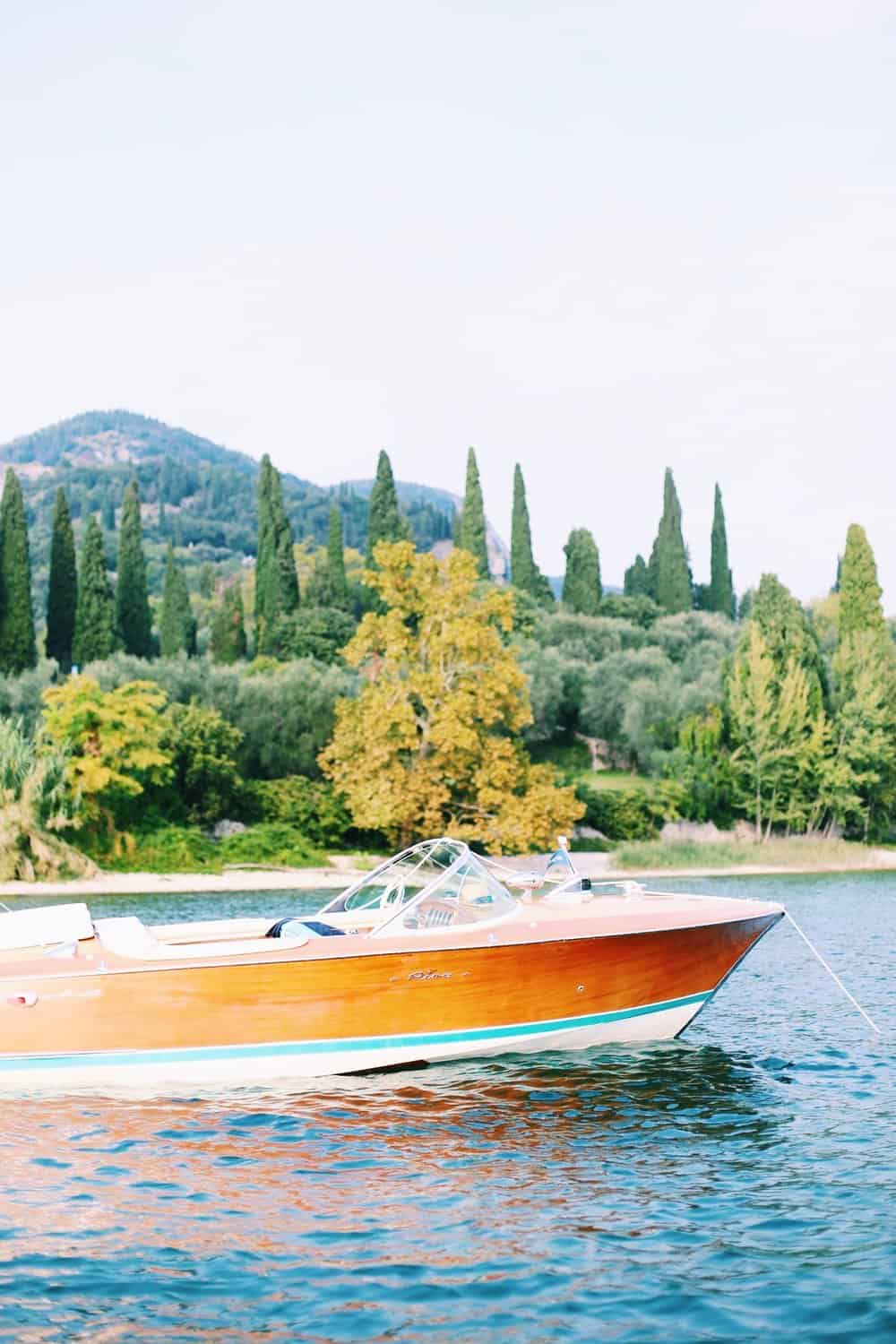 Living in Southern California there are tacos and margaritas pretty much on every corner. We had our fair share of spaghetti and meatballs growing up but the thought of hundreds of ravioli combinations was not something I was familiar with! The trip with Giovanni Rana has seriously opened up a palette to pasta I didn’t even know I had! Americans in general are a little ‘carb a phobic’ but Rana introduced the pasta as something that doesn’t have to be over indulged but rather an every day easy meal for your household!

For today’s recipe I wanted to bring something that was a little more warm and cozy for the fall season. These Giovani Rana Butternut Squash Ravioli are so creamy and delicious just on their own that they needed just a little amp of flavor to go on top! I broke out all of my spices for an aromatic chipotle sage masala sauce! Grab the recipe below to give Giovanni Rana Pasta a go in your home! 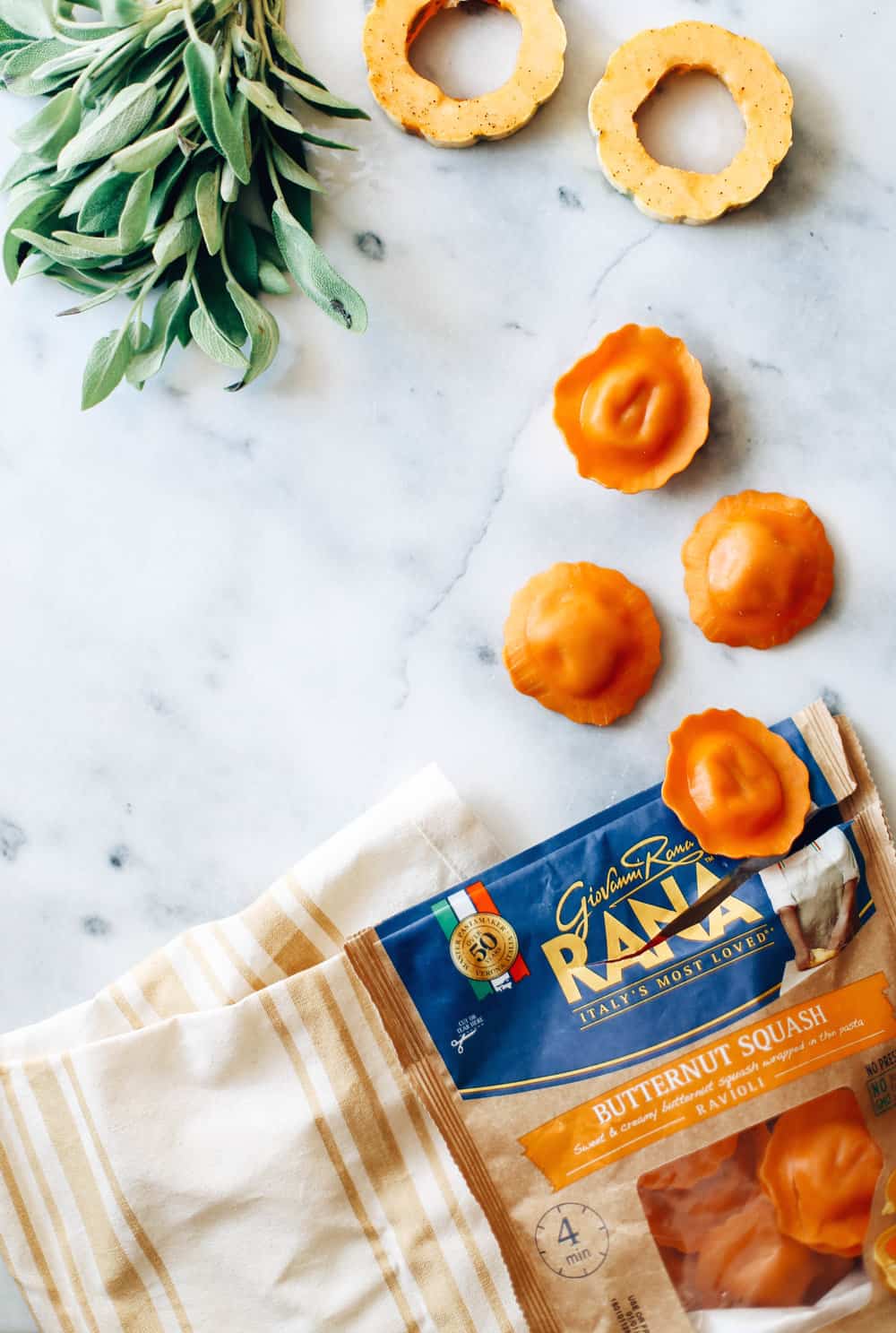 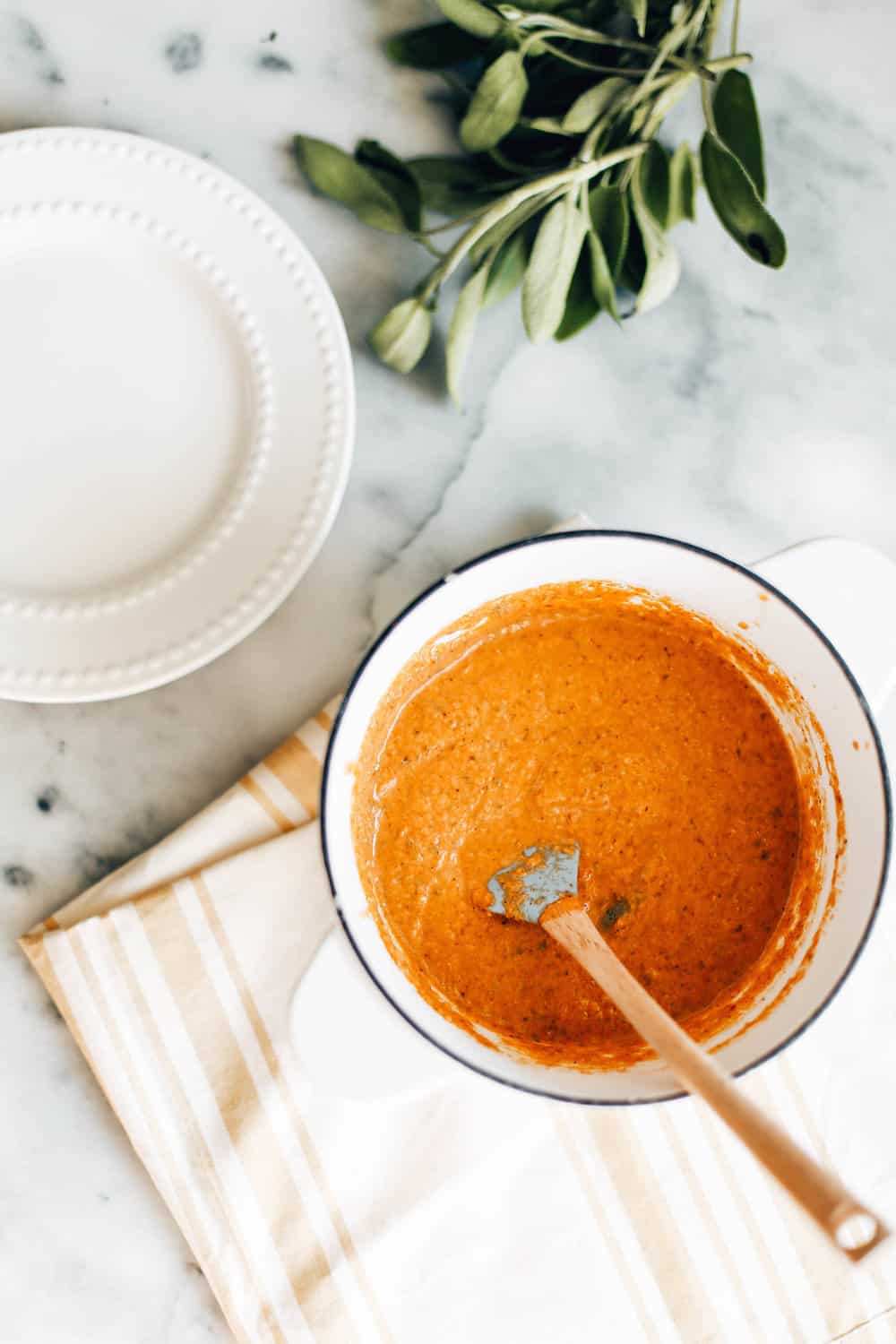 In a food processor or vitamix process all ingredients except for pasta, half & half and cream. Pulse until smooth. Add in heavy cream and half and half at the end and blend until just combined. Heat sauce in a small sauce pan until bubbly and reduce to simmer for 20-30 minutes. Bring a large pot of water to a rolling boil. Drop Giovanni Rana Butternut Squash Ravioli in and cook for 4 MINUTES. Remove pasta with a slotted spoon and serve with a light drizzle of sauce. Garnish with more pumpkin seeds and fresh sage sprigs. 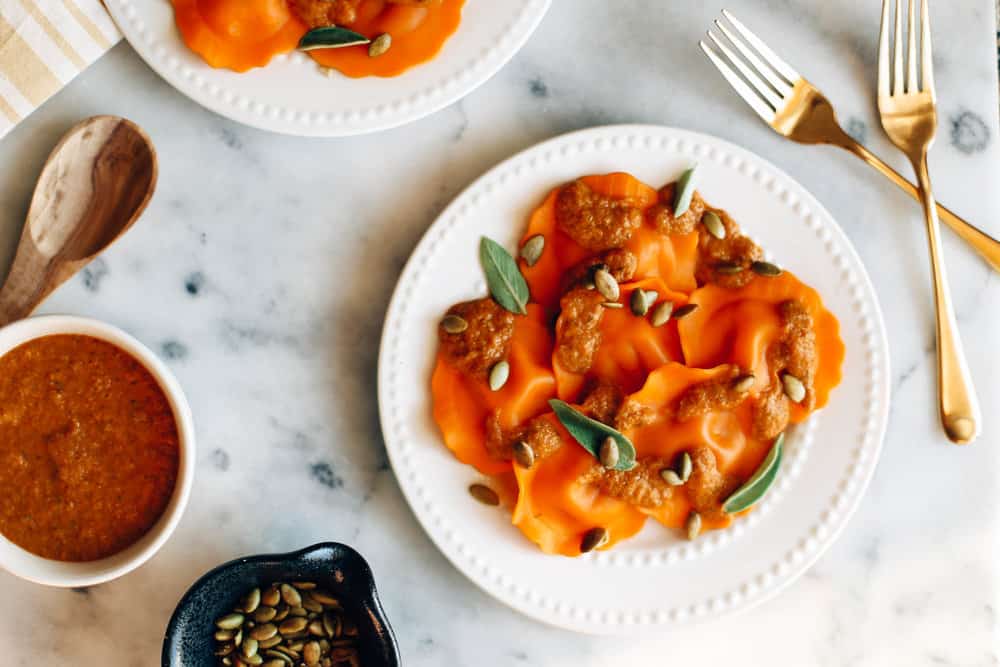 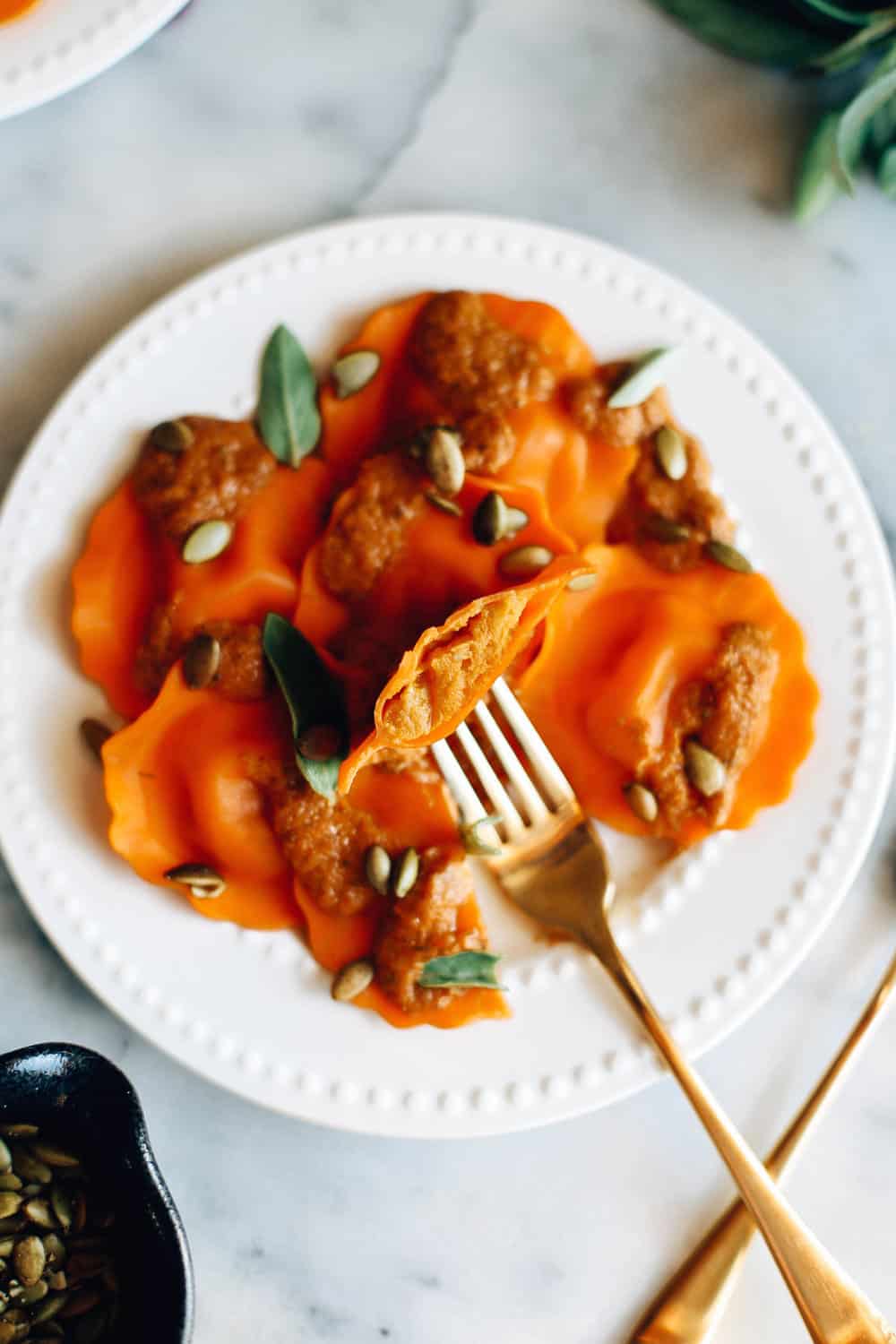